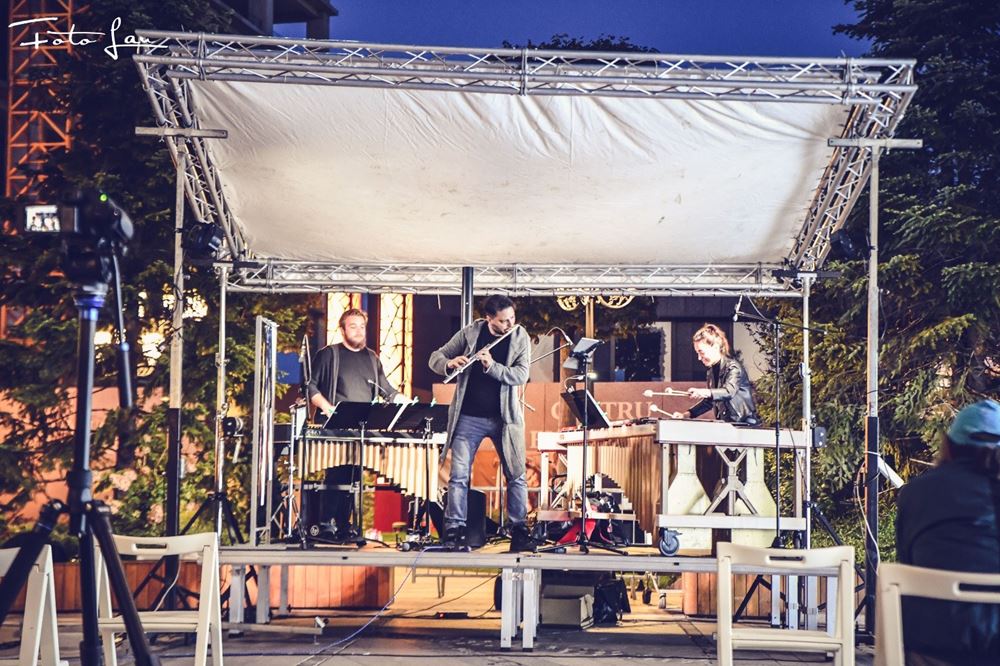 The Hațegan Foundation organized the "Legends" concert in Timișoara within the national tour of the same name. The flutist Matei Ioachimescu, together with PERCUSSIONescu (Irina Rădulescu - marimba, Răzvan Florescu - vibraphone) prepared the “Legends” National Tour, a project in which they held an extraordinary concert at Iulius Gardens in Timișoara, on September 29, 2020. “Legends” brings to the Romanian public a new perspective on the classics of rock music, in the vision of some performers and composers of classical music, on three instruments with a special sound.

Led Zeppelin, Metallica, Iron Maiden, Aerosmith, Nirvana, Depeche Mode, Deep Purple, Guns N 'Roses, are just some of the great "legends" presented in an electrifying program of the highest quality. With a concept in which Classic Rock Meets Contemporary Classics, "Legends" is innovative, attractive and emotional on the contrary, being developed together with contemporary Romanian and foreign composers, for a unique chamber formula in Romania - flute, marimba and vibraphone. The protagonists of the tour are already known to the Romanian public following a series of extremely beloved and requested concerts such as "La Vida Loca", "Origins", "Romanian Rhapsody", "Bits of Romanian Beats" or "Vibraimba". It is about the flutist Matei Ioachimescu, a (re) well-known artist of the international scenes, who, through his spontaneous and creative interpretation and the way he transmits emotion and interacts with the audience, is considered a real “rockstar” of classical music. With this project, Matei Ioachimescu (artist based in Vienna), returns to the Romanian stages in the company of PERCUSSIONescu (Irina Rădulescu - marimba, Răzvan Florescu - vibraphone), an original, exceptional chamber group that already imposes itself on the international stages . Together, combining creativity with remarkable technique, the three artists will explore new musical territories in the "Legends" concert series, offering the audience a completely new sound experience. Among the composers who dedicated works to this project, we find Gabriel Mălăncioiu (teacher at the West University of Timișoara, exceptional Romanian composer, with works sung worldwide by prestigious ensembles), with the work "in Time", inspired of the song "Child in Time" by the band Deep Purple.

Matei Ioachimescu - flute. The famous Finnish composer Kalevi Aho stated about Matei Ioachimescu: “His singing deeply impressed the audience, after each concert several spectators burst into tears, and the applause was unusually long. Matei Ioachimescu is one of the greatest flutists I have ever heard. ”The flutist Matei Ioachimescu is known for his interpretations of the baroque, modern repertoire, but also for cross-over recitals, supporting an impressive concert activity. He is a graduate of the University of Music in Vienna, the city where he settled. Throughout his career he has obtained several important awards and scholarships (such as those from the Thyll-Dürr Foundation or the Yehudi Menuhin Foundation), collaborated with some of the most interesting international musicians and performed on famous stages in Europe and Japan, such as: Konzerthaus Wien, Romanian Athenaeum, Conservatorio Santa Cecilia, Budapest Music Center or Suntory Hall. The debut album, entitled "Lumiere" and made in collaboration with pianist Cătălina Butcaru, is considered by critics a reference product for these two instruments. As a soloist, he presents both classical concerts and first auditions of contemporary composers, together with philharmonic orchestras from the country and abroad. He is known for the national tours Paris, Playlist, Colors of Sounds and more recently La Vida Loca (the internationally successful project on stages in Romania, Austria, Poland and Estonia), which brought in March 2019 the album of the same name. Matei Ioachimescu is a founding member of the Green Thing Ensemble. For his intense work and high quality of supported projects, he was awarded the title of "Ambassador of Integration" in 2013 by the Austrian Ministry of Foreign Affairs. He is invited as a member of the jury in international competitions and holds workshops in Austria, Japan, Hungary, Romania and Croatia.

PERCUSSIONescu - Versatility, sensitivity, virtuosity and permanent interest in innovation are the elements that define PERCUSSIONescu, the only percussion chamber band in Romania founded in 2016, by young musicians Irina Rădulescu and Răzvan Florescu. The initiative of the two is based on the common passion for chamber music and new music alike, as well as the affinity for melodic instruments, namely vibraphone and marimba, two of the most sophisticated and spectacular percussion instruments. The musical direction proposed by PERCUSSIONescu is unique, they are constantly looking to share with the public the music that is on the borders of three distinct styles: classical, jazz and classical-contemporary. The bold and original approach of the two was immediately noticed and appreciated from the beginning, gaining notoriety with each appearance. Among the most important achievements of the band are the representation of the National University of Music in Bucharest at the Festival and International Competition "Humanitarian" in Milan (2017), obtaining the double Erasmus scholarship for the academic year 2018-2019 at the Janaček Academy of Music in Brno, Czech Republic ( the first Erasmus scholarship offered by UNMB for a chamber ensemble) and last but not least, the international debut that took place in December last year, by holding a concert at the International Percussion Festival in Brno. Currently, they are part of the “Connectarts” project, the first online platform in Romania dedicated to the Professional promotion of young performers of classical / contemporary music.